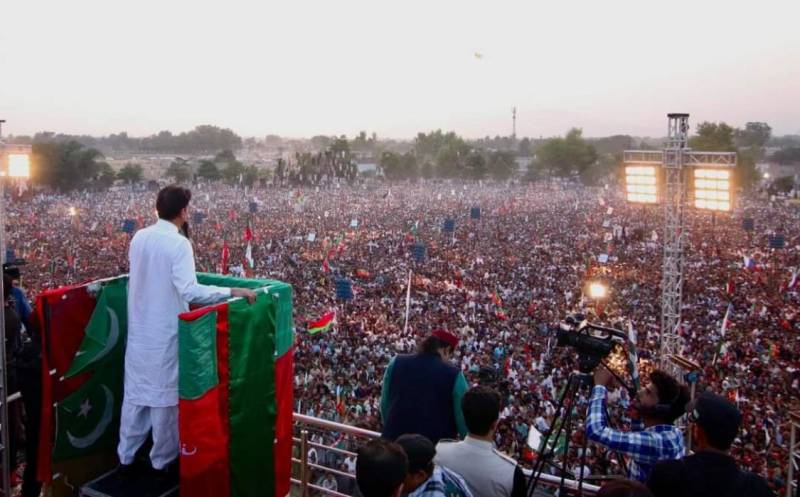 SWABI – Former prime minister Imran Khan on Monday lashed out at the Muttahida Qaumi Movement-Pakistan (MQM-P) and said the Karachi-based party had allegedly targeted police officials in the Sindh capital in the 1990s.

Addressing a large rally in Swabi, Khan criticised the PML-N-led coalition government for the way it was running the Federal Investigation Agency (FIA). He said the FIA would be “destroyed” just like Karachi police was at the hands of the then MQM.

Khan said there was an operation against the MQM in 1996, after which it struck a deal with the then PML-N government. “The MQM then targeted and killed every police officer involved in the operation and till now Karachi police has not been able to stand on its feet,” the PTI chairman said.

Khan also lashed out at the Sharif family for the corruption cases against them before assailing PPP co-chairperson Asif Ali Zardari and Jamiat Ulema-i-Islam-Fazl chief Maulana Fazl Rehman.

“All of them have united to defeat Imran, but all of them will have a collective funeral,” he remarked.

Calling on the crowd to reach Islamabad on his call, Khan said there was only one demand from the people: a new election date so the nation could decide its leadership.

Khan praised Khyber Pakhtunkhwa for being the province with only one PTI dissident and said it reflected the strong ethics, values, faith and loyalty of the people. He said the entire country knew about the lotas (turncoats) of the PTI but the ECP (Election Commission of Pakistan) refuses to see that way.

“It is finding ways to protect them. These turncoats will not be spared by people,” he warned.

Earlier, the PTI chairman said he would reveal the name of the poison which was used to induce a cardiac arrest and kill FIA former director Rizwan who probed the money laundering charges against PM Shehbaz Sharif and Chief Minister Hamza Shehbaz.

He said the man who probed corruption was ‘killed while another officer was fighting for his life’. He said the Pakistani nation will never accept the government of ‘thieves and slaves’.

Firing salvo at PDM leaders, Khan said former president Asif Zardari and Nawaz Sharif ruled the country for 10 years and nearly 400 drone strikes were carried out in the tribal areas.

Meanwhile, security has been beefed up for today’s power show. A 60 feet long and 30 feet wide stage has been prepared at Swabi Stadium while a huge gathering of PTI supporters can be seen at the venue.

The former ruling party is organizing rallies all over Pakistan to put pressure on the coalition government to hold early elections.

Earlier, Khan asked the masses to brace for a  grand power show in the capital Islamabad for which the date is yet to be announced.