KARACHI – Sindh Education Department on Friday suspended the registration of a private school in the provincial capital and sealed the premises after secrete cameras were found installed in washrooms.

Reports in local media said that at least two hidden cameras were secretly installed in the washrooms of the Haracks School located in Safora Goth.

A female teacher at the private school lodged a complaint with the Directorate of Inspection of Private Institutions Sindh, and later a committee visited the school and found hidden cameras.

The education department officials confirmed that women were being filmed with the hidden cameras, while a number of female teachers and some students reported the presence of cameras. 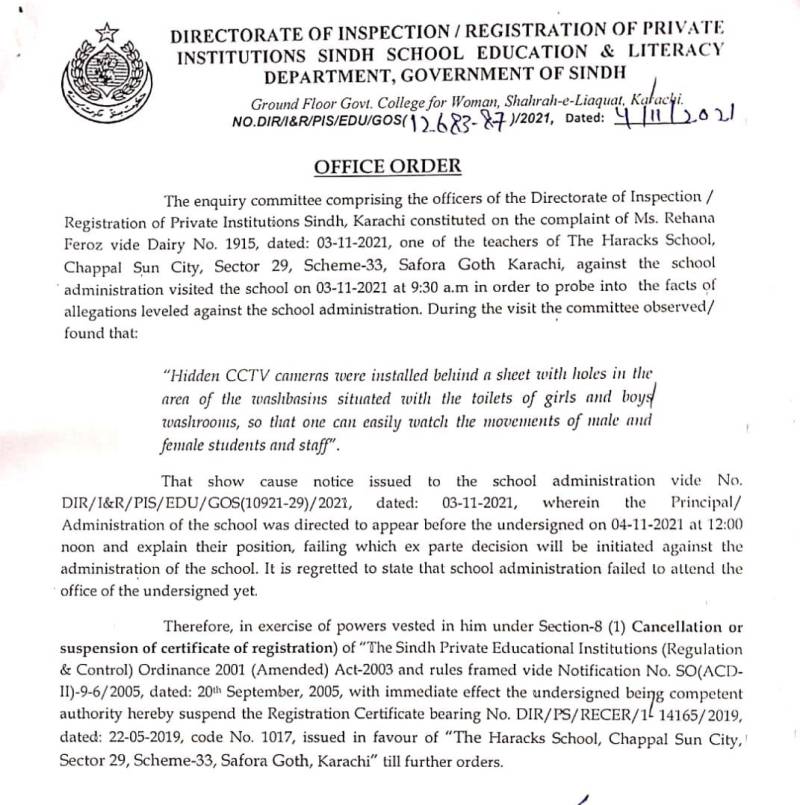 The cameras were installed behind a sheet with holes in the area of the washbasins situated with the toilets of girls and boys.

Earlier, an inquiry committee of the inspection directorate served a notice on the school administration, to appear before the department and explain the act however, no school official turned up in disregard of the orders.

On the other hand, the school administration said that the hidden cameras were installed in the washrooms for monitoring purposes.

Parents of students and teachers also staged a protest against the private school after news of the hidden cameras went viral on social media.

In another development in the case, the federal investigators found itself at loggerheads with the Sindh department officials as they didn’t inform the FIA and local police in coordination. Federal Investigation Agency officers claimed that the crime scene has been contaminated.

FIA officers waited for hours outside the school premises after the washrooms being sealed by the education department.

Rs28 billion relief package for the poor will be part of next budget, says PM Shehbaz