One dead, 11 injured in blast at Karachi’s Kharadar 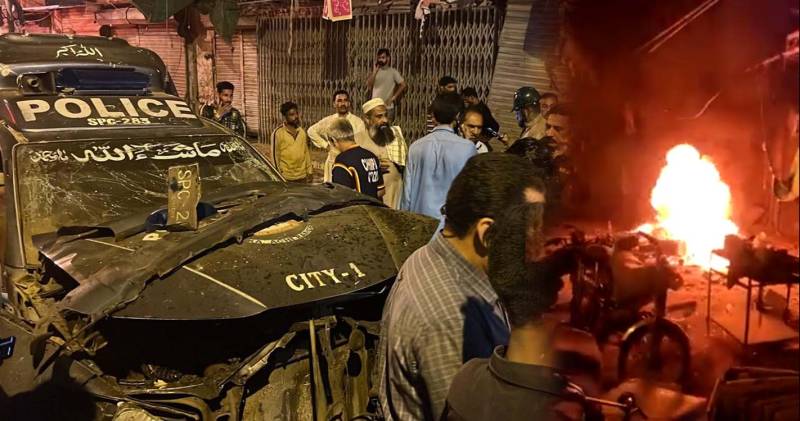 At least one woman succumbed and eleven people sustained wounds in an explosion near a mosque in Karachi’s Kharadar.

The blast took place on Jinnah Road in the Sindh capital. A police vehicle was completely wrecked while several other parked cars were partially damaged in the powerful explosion.

Reports suggest that explosive material was planted on a motorcycle that was triggered through a remote-controlled device.

Video from Karachi blast site shows a damaged police vehicle and motorbikes. In another video, ambulances are seen transporting the injured to the hospital. pic.twitter.com/TIz68Q9UuQ

In clips doing rounds on social media, motorcycles can be seen in flames as people tried to put out the inferno.

Large contingents of police and Rangers cordoned off the area, and the Bomb Disposal Squad (BDS) has started the investigation to ascertain the nature of the explosion.

Injured people were shifted to the medical facility and the condition of four of the injured was said to be critical.

Sindh Chief Minister Murad Ali Shah has taken notice of the explosion and directed the Sindh police chief to submit a detailed report on the incident and also ordered the district administration to reach the spot and carry out rescue work.

Karachi Administrator Murtaza Wahab shared a tweet in this regard, saying the number of injured increased to 11 while four are critically injured.

I can so far confirm that 7 people have been injured from the blast & they have been shifted to Trauma Centre. 4 are critically injured & are being attended to while 3 are stable. Will update once more information is available

The neighborhood in the district south of the seaside metropolis is densely populated and a heavily frequented business hub of the city.

The recent terror event occurred days after an explosion rocked the Saddar area of the port city on Thursday killing one and injuring several citizens.