KARACHI – Karachi administration has declared a public holiday in the port city as the officials prepare to cope with torrential rains and possible urban flooding in wake of Cyclone Shaheen.

A statement issued by Karachi Administrator Murtaza Wahab cited “Keeping in view the situation resulting from the expected tropical cyclone and the rainfall, it has been decided that Friday the 1st of October will be a public holiday. All offices, educational institutions & businesses except essential services shall remain closed in Karachi.” 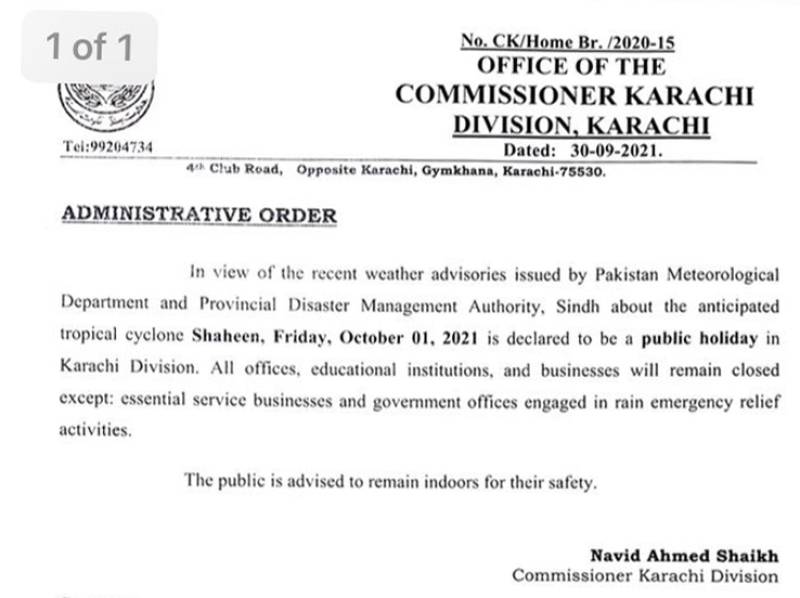 Meanwhile, the commissioner’s office has issued a notification directing all educational institutions, offices, and businesses to remain close. It further ordered to remove all hoardings and billboards in the country’s largest metropolis with immediate effect.

The Karachi University has also canceled all scheduled exams for today while the new date will be announced later.

Speaking in a morning show, he clarified that it is not right to call it Cyclone Gulab after it hit the Indian coast and made landfall. Adding that, the new system is capable to become a cyclone in the next eight hours and is currently at a deep depression stage.

Sarfaraz further added that the rains will continue over the weekend while the alert stays in place for people working near ports and for fishermen.

A recent forecast issued by the Met Office stated that extensive rain and thunderstorms with scattered heavy to very heavy rainfall could also turn into extremely heavy rain with squally (strong) winds in Karachi, Hyderabad, and other cities from Sep 30 to Oct 2.