KABUL – TIME has revealed its list of the 100 most influential people of 2021 and Afghan Deputy PM and Taliban co-founder Mullah Abdul Ghani Baradar has been named as ‘charismatic military leader and a deeply pious figure’.

The ‘prestigious’ list is broken into six categories including icons, pioneers, titans, artists, leaders, and innovators. The 53-year-old made the list in the ‘leaders’ category.

Profile’s author, journalist Ahmed Rashid, stated him as the man who negotiated the terms after which Taliban swept to victory in war raked Afghanistan. Baradar was said to be the leader who took all key decisions, including announcing amnesty to members of the former Afghan setup. 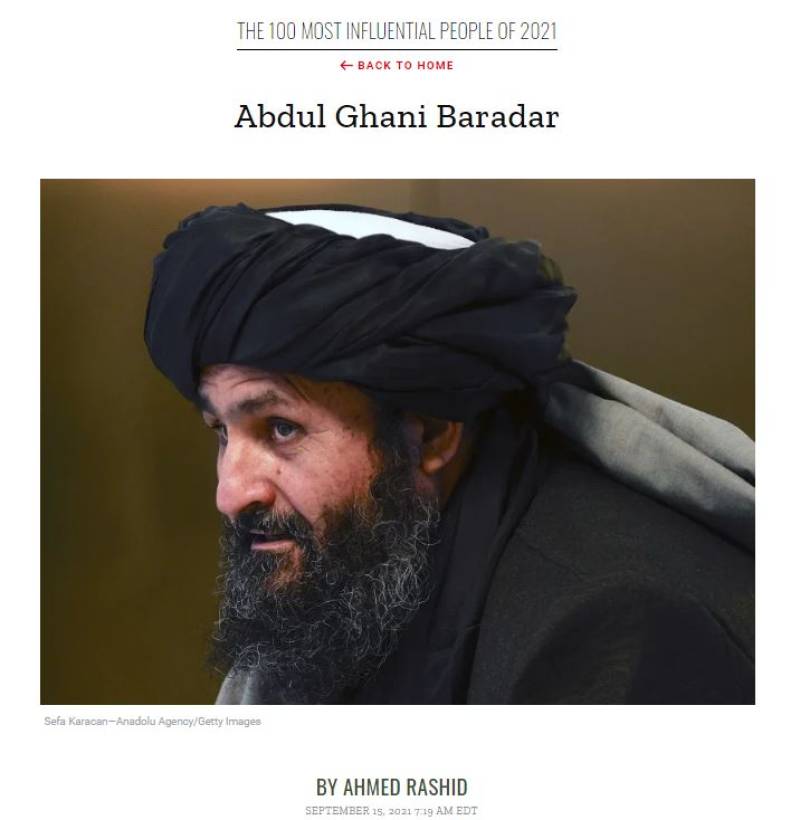 Baradar played his part in negotiations that prevent bloodshed upon seizing Kabul and also developing friendly relations with the neighboring country.

Baradar appears to be the first leader from the Afghan Taliban to make it to the list. The NewYork- based magazine defines him as a “Quiet, secretive man who rarely gives public statements or interviews, yet represents a more moderate current within the Taliban”.

Ahmed Rashid: “A quiet, secretive man who rarely gives public statements or interviews, Baradar nonetheless represents a more moderate current within the Taliban, the one that will be thrust into the limelight to win Western support” #TIME100 https://t.co/YC6MfwgS56

The Afghan co-founder is expected to negotiate with western countries besides bringing desperately needed financial aid. Baradar held senior positions in the group in the previous regime and was once a close friend of Mullah Mohammad Omar who gave him the title of ‘Baradar’. He served as a senior military commander responsible for attacks on coalition forces, a UN sanctions notice said.

Later, he was detained and imprisoned in 2010 and following his release in 2018, he led the Taliban’s political office in Qatar and becomes famous in peace talks with the US.

Earlier in 2019, Prime Minister Imran Khan was named on the annual list while Nobel Laureate Malala Yousafzai has been featured in 2013 and 2015.

Families in Afghan city dine together after ban lifted

Leaders pay respects in UAE after death of pro-West president